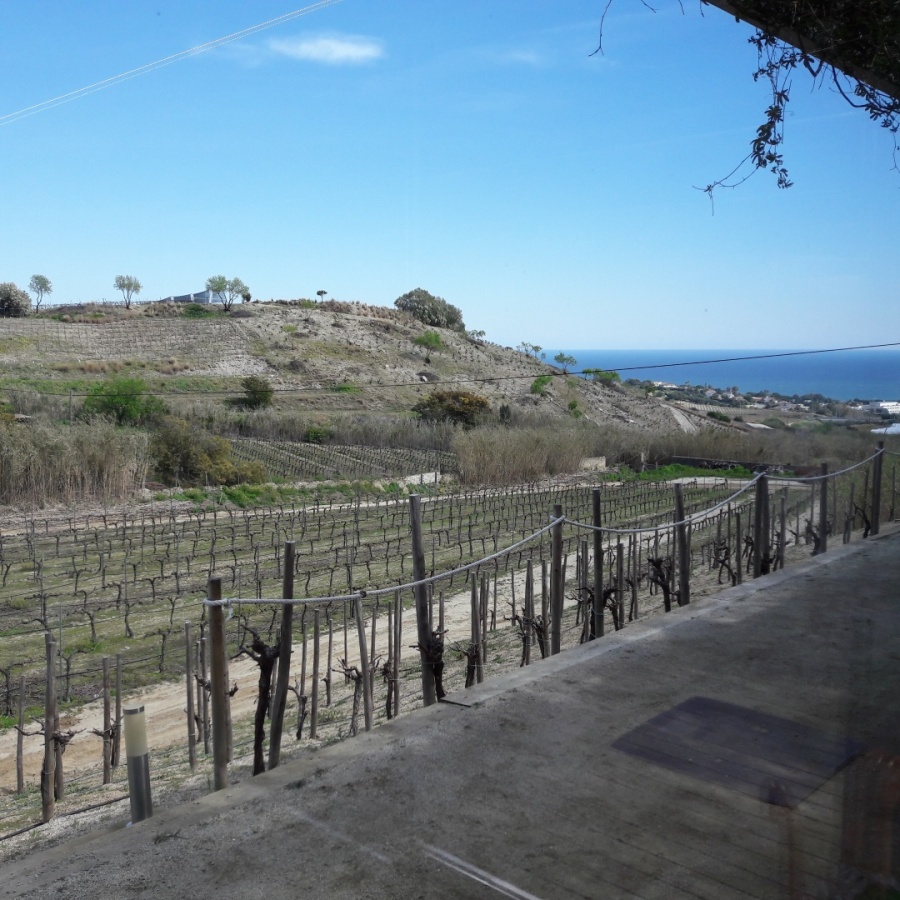 All the years I’ve been coming to Barcelona and exploring the wines of Catalunya and never – until now – have I visited the tiniest Denominacion d’Origen (DO), Alella!  It was an oversight that I got around to remedying this week.

Alella is the name of the town in the Maresme, the coastal area just north of the city, as well as the name of the DO. My plan was to get the bus from downtown Barcelona, with all the hassle that entails. When I discovered that Alella is but a 16-km hop from the city, I felt that a bit of solidarity with the taxi driving fraternity was justified. Twenty minutes later, after a brief burst of motorway, a wander through the town and a bit of argy-bargy with the taxista’s GPS, we reached our destination. 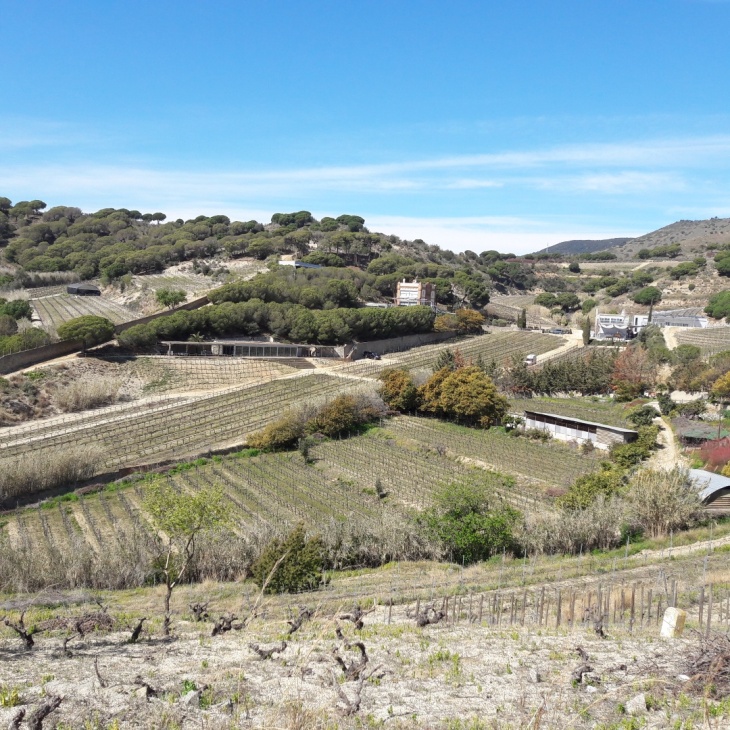 DO Alella, briefly, is one of Spain’s oldest and (I think) its smallest DO – barely 300 hectares in total, with just eight bodegas. Currently 85% of the vineyards are farmed organically and the hope is that before long all participating wineries will be certified organic.

Alta Alella is one of the eight. The winery, which describes itself as una bodega familiar de agricultura ecológica, was founded by Josep-Maria Pujol-Busquets in 1991. The location of the bodega and visitor centre is spectacular, high above the town in the midst of the vineyards with sweeping views out over the sea one way, forested hilltops and the obligatory umbrella pines on the skyline the other, and in the distance, Barcelona. On a fine day, you can even see the towers of the Sagrada Familia, it’s that close to the city.

The winery now has 60 hectares of vineyards in total. The soil is sauló, decomposed granite (think Beaujolais), which looks like dark, rough sand. It drains well and is very acidic, giving white wines in particular a brisk freshness and pronounced minerality.

What does Alta Alella make and what should you look out for? Of all the wines produced, fully 70% is cava (DO Alella has a long-established white wine tradition, particularly of the sparkling variety). Their Mirgin Exeo was in the first tranche of the newly designated Cavas de Paraje Calificado (click here for an explanation of these classy cavas and who makes them), of which to date there are only twelve; more will follow. (And at the risk of teaching grandmas to suck eggs, this is the moment to remind you that cava sparkles according to the traditional (i.e. champagne) method, where the bubbles develop magically in the bottle from the wine’s second crack at fermentation, not prosaically in tanks as for prosecco.) The rest of AA’s wines are still, both white and red.

Alongside the classic selection there’s a range of natural wines (which btw Josep-Maria Pujol-Busquets, prefers to call ‘radical wines’). These have their own production facility separate from the main cellars, which is housed in recycled shipping containers from the Port of Barcelona. It’s called Celler de les Aus (Cellar of the Birds), and each wine is named after one of the birds that haunt the richly bio-diverse vineyards and the Serralada de Marina Natural Park that rises directly above them.

At this moment of the visit my ornithological Catalan got a pretty testing workout. Luckily, Gonzalo our guide came to the rescue and supplied all the English names. Apart from the blackbird – okay, that was the easy bit – the only other bird familiar to me (from a visit to Domaine Monplezy in Languedoc, who have one on their logo) was the lovely, crested hoopoe (the second one down, below). Seems that his evocative Catalan name is puput – he flits amongst the vines and the scrubby, sunburnt bushes refreshed by breezes that come up the valley from the sea, presumably uttering a cry that sounds like pu-put the while. 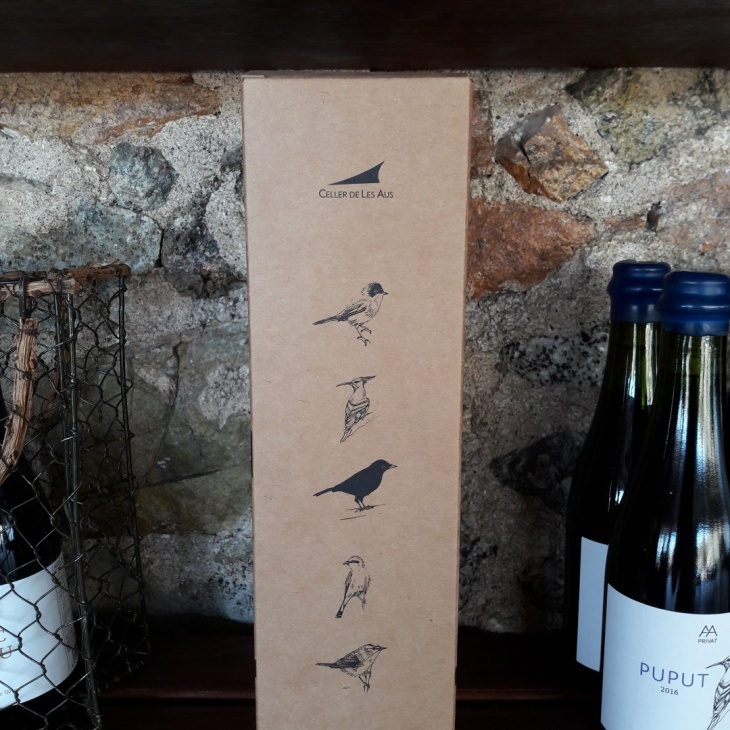 Bruant (bunting), made from 100% Pansa Blanca (more familiarly known as Xarel-lo), is a brut nature, i.e. no added sugar, and also no added sulphur – delightfully fresh and appley. Capsigrany (shrike) was a revelation (revolution?). Made from a pink mutation of Pansa Blanca called – logically – Pansa Rosada, it’s an appealing orangey-pink in colour, extremely appetising, discreetly bubbly with toasted almond and pink grapefruit flavours (though perhaps it’s the colour that led me in that direction). Loved it.

Tasting Bruant, the one made without sulphur, I was reminded of a piece by Andrew Jefford in Decanter when he asked: “Why is it that sulphur-free sparkling wines seem to work more successfully in general than their still counterparts? The logical answer, I guess, is because they are awash with protective carbon dioxide — and so have less need of the sulphur in the first place”. I find most sulphur-free still wines challenging (and many of them frankly unpleasant) and can’t really see the point, especially if they end up tasting like cider (or worse). Bruant had none of those cider-y notes, only apples and pleasantly yeasty flavours. I was surprised by how much I liked it.

Next came three of their classic cavas, all of which receive a minimum of 30 months ageing (remember that your average cava probably gets only 9 months), all bottled in distinctive, slender bottles and each with the disgorgement date marked. First was Laietà, a blend of Pansa Blanca, Maccabeo, Pinot Noir and Chardonnay; then Opus Evolutium (shortly to be promoted to Cava de Paraje status), an explosive mouthful made from Pansa Blanca and Chardonnay; and lastly Mirgin Exeo (already in the Cavas de Paraje club), same grapes but in different proportions. These are all great examples of the new generation of serious, super-elegant cavas, the kind that believe in themselves and in their capacity for greatness and ageability. I loved them all for their elegance and subtle Mediterranean character, and consider they would give many a run-of-the-mill Champagne a run for its money. 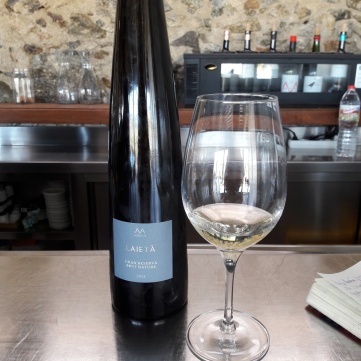 Still wines: Tallarol (Sardinian warbler, dontcha know), made from Pansa Blanca, half of it fermented in amphorae and the other half in concrete eggs – aromatic, fruity, clean as a whistle, this one a natural/radical wine but neither too natural nor too radical; and Cau d’en Genis, my favourite of the whites tasted, from sixty year-old gnarled bush vines growing in the steep vineyard that’s visible across from the visitor centre (on the shoulder looking out towards the sea in the lead picture, above). Raised half in stainless steel and half in concrete eggs, the wine is rich and plump from its 6-month spell on the lees [spent yeast], yet lipsmacking and crisp in character. 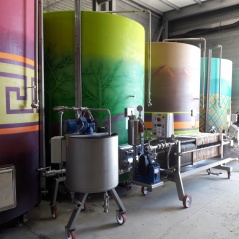 Finally came three reds: first GX, their entry-level red, made from Garnatxa (Garnacha, Grenache) – fun, uncomplicated, full of bright red berry flavours, the kind of wine the French call gouleyant; Merla (ze blackbird) from Mataró (Monastrell/Mourvèdre), deep purple, dense and syrupy, a bit rustic for my taste; and Orbus, 100% Syrah, made only in exceptional years and which spends 14 months in used barriques (from François Frères) – plummy, spicy, with firm tannins. We finished with a valedictory sweetie, Mataró Dolç Puput – lovely prune flavours, with the rustic Mataró somewhat tamed by the wine’s natural sweetness, just the ticket with a slab of deep, dark chocolate.

For those resident in or near Basel: you can find a selection of Alta Alella wines at Cava Hispania

AND…be sure to time your visit so as to fit in a lunch at Els Garrofers, a smashing Slow Food, Km.0 restaurant with all organic produce, super-creative cooking and one of the best 19-euro lunch menus I’ve had anywhere – a lovely recommendation from Gonzalo at Alta Alella. (Review to follow.)