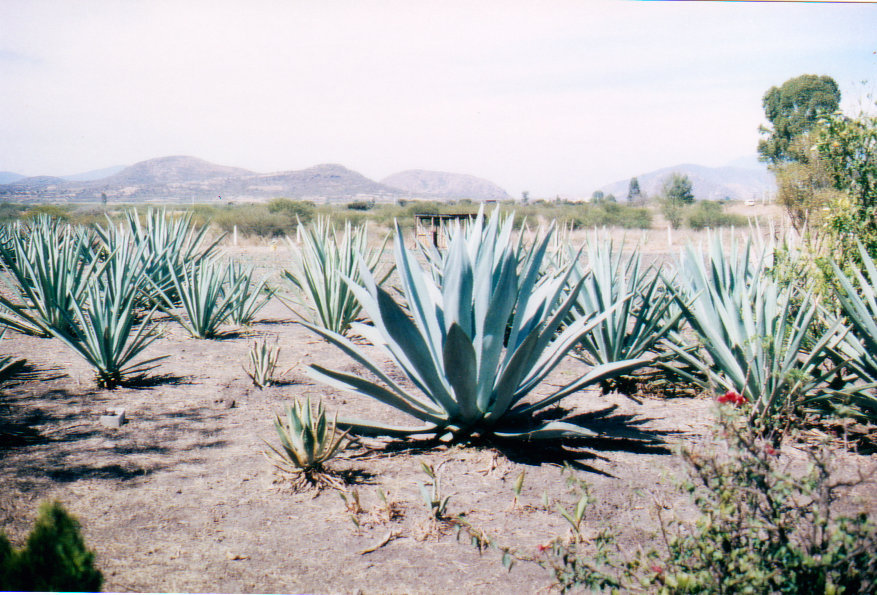 If you think you’ve got tequila licked, maybe it’s time to move on to mezcal. For years tequila’s poor relation, the country cousin of the agave spirit world has shed its reputation as rough rot-gut, guaranteed to cause a ‘horripilating hangover’ (Malcolm Lowry’s words, in Under the Volcano), and gone up-market. It even has its own appellation d’origine. Mezcal, my dears, has arrived – and there’s no better time to taste it than in November (specifically on 1 November, el Día de los Muertos, Mexico’s Day of the Dead, when this was due to go out but my scheduling went awry…).

Ages ago (2001), when I was in Oaxaca researching an article for the FT on mezcal (of which this is a revisited version), I learnt that there are over a hundred different varieties of the agave or maguey plant. It’s a tough and versatile succulent which thrives in harsh, hot, arid climates. From the recesses of its deep, dark heart comes a whole range of delicious and/or useful products: a honey-like liquid called agua-miel (honey-water), a syrup, a leavening substance similar to yeast, vinegar, pulque (a fermented drink) and various distillations. Its silvery-blue spiky leaves serve to make ropes, sandals, hats, sacks, hammocks, strings for musical instruments, fishing rods or building materials. Even the paper for the ancient codices – some of which show scenes depicting the age-old process of fabrication of mezcal – was made from agave fibres.

Mezcal comes principally from Agave angustifolia, a maguey cactus similar to the one responsible for tequila, though with finer, elongated, elegantly tapering leaves. This alcoholic drink has been made for centuries throughout Central America. To judge by some of the graphic illustrations found in codices or in murals, the process has changed little over the centuries.

Oaxaca is the centre of mezcal-making, though the appellation permits its fabrication in other Mexican states (Guerrero, Jalisco, San Luis Potosí, Zacatecas and Durango).
The place where mezcal is made is known as a palenque. Nowadays there’s such a demand for the fiery spirit that much of it is produced industrially, but the farm I visited, just outside the city, was a tiny artisanal,  small-scale affair – the average size of a mezcal farm is 2-3 hectares. It takes eight years for an agave plant to reach full mezcal-making maturity. By this time it’s about a metre high and resembles a mature artichoke plant, only with much tougher, spiky leaves. 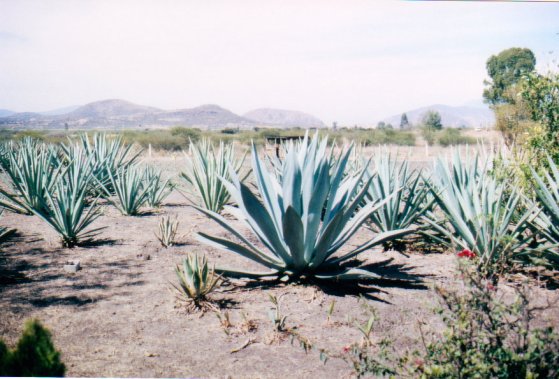 The process starts when the whole plant is uprooted and the leaves are unceremoniously lopped off, leaving only the neatly trimmed heart of the agave, called a piña (pineapple), which it closely resembles. These giant ‘pineapples’ are assembled around a huge, stone-lined barbecue pit about four metres across and a couple of metres deep. In the bottom of the pit a fire is lit, and once the fire is burning fiercely, a layer of stones is placed on top. The piñas are beaten about a bit to encourage them to release their sugars, piled up on top of the stones in a sort of superb funeral pyre, covered with mats and earth, and left to roast gently for up to three days. The smoky smell of the deeply caramelized agave hearts is bewitching and unforgettable and they give mezcal its distinctive character. [somewhere I have loads of brilliant pics of this whole process, but as they predate my digital era, I can’t find them…]

Next comes the grinding. The roasted piñas are slashed into smaller pieces with machetes and placed in a wide, shallow, cement-lined ‘well’. A millstone connected to a stout central spindle is turned by a mule, who plods patiently round and round, dragging his heavy load. After a few hours, the combined efforts of mule and stone have reduced the piñas to a mound of fibres.

The resulting mash is transferred to huge vats where it will ferment. The final step is distillation. The still, set in a large, square base of adobe, is heated by a wood fire. From the first distillation comes a fearsome spirit (the ‘head’) with more than 60% alcohol. Later comes the regular mezcal, with a lower alcohol content. This is distilled a second time, a step which will refine and improve it. The ‘tail-end’ spirits from the end of the process are kept for the next distillation. (Drunk warm from the still, my guide Alejandro assured me, mezcal is a time-honoured remedy for blasting apart kidney stones – presumably leaving you legless as well as kidney stone-less.)

Most mezcal is drunk locally, without further ado or refinement – as an aperitif, digestive, or sleeping draught. There are regional mezcales like mezcal minero from Santa Caterina Minas, or matlateco from Santiago Matlatán, the self-styled world capital of mezcal. Interesting-sounding is the mezcal de pechuga to which corn-fed chicken breasts have been added on distillation, a step that’s claimed to enhance both flavour and colour. (History doesn’t relate what then happens to the chicken breasts, but the potential is clearly great.) Connoisseurs look for mezcal de Tobála, a single village mezcal from the rare wild maguey of the same name. There are also a number of flavoured mezcals, aromatized variously with mango, cinnamon or orange peel. Probably the most challenging of all is the mezcal de gusano, the one with the worm in the bottle.

Increasingly, a favoured few mezcals are refined, filtered, elegantly bottled and labelled. These are the designer mezcals, and they don’t come cheap. There are three ‘grades’: blanco (transparent, quite tough, un-aged spirit), reposado (pale amber, its rough edges knocked off after five months in 225-litre barriques) and añejo (a deep golden colour, the product of up to two years’ ageing in barriques). Masters of Malt in the UK currently lists a bottle of smooth, discreetly smoky Los Cuerudos reposado at €47 (around £42).

There are certainly less expensive mezcals to be had. They can be found in any of the swing-door saloon bars in Oaxaca within a block of the city market, and they come with a guarantee of Malcolm Lowry’s ‘horripilating hangover’. Just the thing for the Día de los Muertos.