Mention the word chili (or even chile) and most people think New World – Mexico definitely, Texas and New Mexico probably. Not many know that in a tiny outpost of the Old World, in a corner of the Pays Basque tucked away near the Spanish border in southwest France, a small red chili known as Piment d’Espelette has been firmly established for over four centuries.

How did this feisty little red chili pepper come to pack such a punch in the Basque country? Jean-Louis Salaberry, a Piment d’Espelette processor whose shop, BiPiA, in Hasparren in the heart of France’s Basque country doubles as a museum, explains that it was thanks to one of those intrepid 16th-century Basque explorers who used Bayonne as their base.

On return from their fabulous voyages they brought treasured plants from the New World: chocolate, for which Bayonne became celebrated; corn which would feed the ducks and pigs for the hams and foie gras that are the pride of southwest France, and members of the capsicum family, sweet and hot. Amongst the latter, says Salaberry, a small, medium-hot chili pepper took root in the favorable climate and soil of the Nive valley, inland from Bayonne, and proceeded to carve out a niche for itself in the local gastronomy.

Used initially for medicinal purposes, the piment basquais (as it was originally known) steadily gained the upper hand in the kitchen and quickly supplanted the much pricier black pepper. “In the Pays Basque, we have always used our piment in place of pepper”, observes Pierre Accoceberry, manager of the family-owned Accoceberry plant on the edge of the village, where they grow and process Piment d’Espelette. It has a lovely toasty, sweetish and peppery nose. Taste-wise, it falls into the ‘warm-glow’ rather than the ‘blast-your-sinuses’ category, ranking fourth (alongside the likes of chile poblano) on the official Scoville heat scale (1 being the mildest and 10 the hottest).

The annual life cycle of the chili begins around the feast of St Joseph, 19 March, when the seeds are sown under cover. With a little gentle heat the plants soon grow to a few centimeters high. Next the infant seedlings are pricked out, moved to individual pots and left to grow under cover till they reach about 50cm in height.

Towards the end of May when the soil has warmed up and all danger of a late frost is past, the seedlings are planted outdoors in serried ranks, their roots shaded and protected from weeds by a mulch of black plastic. “Chilies like to have their feet in the wet and their heads in the warm”, says Jean-Louis Salaberry. At this point they are still green.

Harvesting starts during August and continues till the first frosts (around mid-October) sound the death knell of these small, annual plants. The chilies, now resembling small, pointed red peppers, are harvested in succession: not all the fruits on each bush reach the requisite state of ripe red perfection at the same time – luckily for the producers, who have a necessary period of grace to deal with the current crop between successive sweeps.

After the ripe fruits are sorted, they are cleaned, painstakingly threaded onto fine string and hung up to dry. Traditionally the chilies were suspended on the east façade of the white painted houses that are typical of the region, the dramatic blood-red garlands blending harmoniously with the classic red shutters and window frames that distinguish Basque houses. Sheltered on this side, explains Salaberry, they were safe from the wet weather from the west, the cold from the north, or the warm and fearsome south wind that blows up through the valley in autumn. 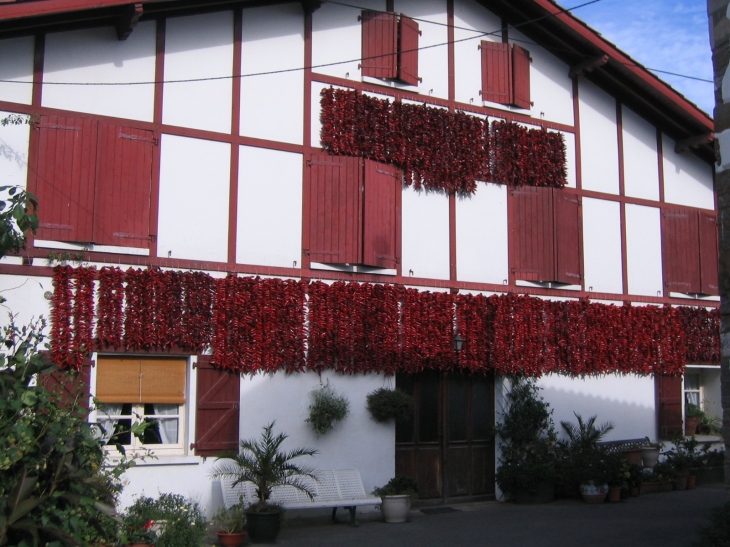 Though many Piments d’Espelette nowadays are dried under cover, you can still find some strung up outside the houses for show – the best time for Espelette-spotting is in September and October, when the new piments have just gone up.

Once air-dried, the chilies are sorted again, de-stalked and spread out on wicker or metal trays. In the last step, the drying process is completed in special fan-assisted ovens at 45-55oC for up to 2 days, with a final brief blast at 70oC. This gives the chilies their characteristic, faintly toasted aroma. Now all that remains is for them to be finely ground, seeds and all, and put up in jars, ready for sale.

The end product ranges in color from orange to deep red, depending on whether the peppers were harvested early or late in the season explains Laurence Lastiri, a small-scale, organic producer in Itxassou. She sells her award-winning Piment d’Espelette on Le Gout est dans le Pré website and every Wednesday morning in the market in Espelette, where she can be found chatting with customers and giving tips on how to use this spicy Basque pepper.

You can find Piment d’Espelette in good grocers/delis/supermarkets. Or order online from the following producers:

3 thoughts on “Piment d’Espelette: The Basque Pepper with a Bite”